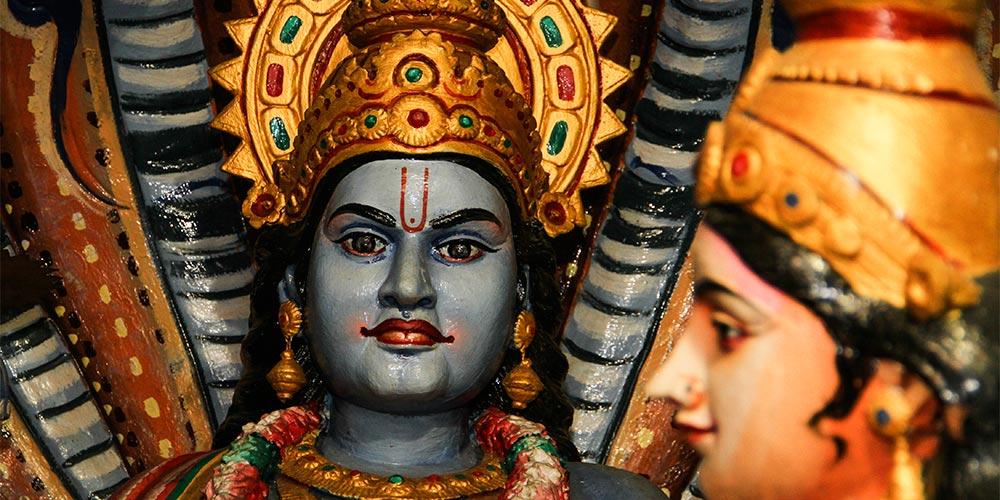 There are an unlimited number of concepts that make up all the major religions. For Hindus, this is also true. This religion that is practiced and influences the lives of nearly a billion people, has a number of important concepts that guide Hindu worldview and way of life. Below is a review of just a few of the key concepts that make up the Hindu worldview. There are many more important concepts that could be mentioned, but will be left to the deeper investigator who will need to look beyond this site for more information. See the bibliography for some great sources that can help with this initiative.

It is impossible to discuss Hindu understanding of life without referring to the term dharma. However, this term is not easily translated and understood. Indeed, many scholars argue that it is impossible to define this important term in English. Even so, looking at several different English terms, which dharma describes in one term, can help to develop a better understanding. Often, Indians refer to their religion as sanatana dharma or eternal dharma. Some have used the term "religion" as a substitute for dharma, but this seems insufficient. Dharma is more often compared to "duty," but in a broader sense than it is used in English. In the Hindu worldview, each person is born in a certain jat or varna, usually translated by caste. Certain duties are expected from each jat. Dharma is a duty one is born to perform. The Bhagavad Gita discusses dharma in relation to duty, and is one of the best examples of comparison between duty and dharma. Another way of explaining dharma is to refer to it as the laws that govern the universe. It is the invisible force that guides the universe as we know it. These are just examples of ways in which dharma can be superficially understood, but the reality is that this is a Sanskrit term that is very difficult to translate.

Karma is a term that has found widespread use in places far beyond the borders of India. It has become common for English speakers to use this term to describe events that happen in their lives. This is also a key concept in the Hindu worldview. Karma are the achievements in one's life, which then dictate how a person will be reborn in a future reincarnation. In the Hindu worldview, it is believed that people are born repeatedly until, after many rebirths, moksha or liberation from rebirth is attained. If one was born as a Brahmin, for example, this is a result of the positive karma of a previous life. Many of the rites and practices performed at the time of a person's death are performed to improve the karma of the deceased, and thus, help him or her to have a better rebirth. Much of the activity of the Hindus has a direct or indirect connection to the belief in karma. Much of life is spent trying to improve a person's karma by performing puja or by making pilgrimages to sacred sites. This concept reinforces the Hindu worldview that embraces a circular understanding of time. This is very different from the Western understanding of history as linear, and with a starting point; for the Hindu there is no starting point for history, instead it continues to repeat itself from era to era. Therefore, it is believed that each person is in a position of life based on the karma of an earlier life. Further, individuals are not aware of the details of their past life, nor are they able to know in what position they will be reborn after they die.

At the center of many Hindu rituals is bhakti - loving devotion to a deity. Bhakti can be manifested in innumerable rituals, pilgrimages or other acts of worship and devotion. It can be performed at home or between crowds during festivals. For example, a Hindu can be devoted to the goddess Kali, Lord Krishna, or Shiva and express bhakti for each deity through special chants or bhajans. There are many Hindu sects that have even developed highly emotional and ecstatic forms of bhakti. Throughout India's history, there have been several instances where large groups of people, in rejection to the excessively formalized and philosophical religions around them, have turned to loving devotion as a way of following divinity. While people can have a wide variety of practices and objects of affection, most Hindus show tremendous devotion, somehow, as the greatest outward demonstration of their beliefs. It has been observed that if nothing unites the different Hindu sects and schools, bhakti does. It would be almost impossible to really understand the Hindu worldview without understanding the importance of bhakti.

Popularized by the film of the same name, the term 'avatar', like 'karma', is commonly used in English. The roots of this term are Hindu in nature, and still play a very important role in the Hindu worldview. It is difficult to find an English equivalent for this term, though some use 'incarnation'. However, the problem with using the term incarnation is that it carries Christian perceptions that do not accurately convey the concept of avatar. The word avatar is used to describe the act of a god or goddess coming to Earth for a special purpose, generally in human form, though not limited to the human form. Avatar is also the name used to describe such forms. For instance, an avatar may come to earth to teach human beings the ways of dharma through exemplification. In Hinduism, the god Vishnu is known for repeatedly coming to earth in various forms. In total, he has come as an avatar at least ten different times as ten different avatars. Some of these ten were like animals, while the rest resembled humans. The best-known avatars of Vishnu are Krishna and Rama. Vishnu had come to Earth as Krishna and Rama because evil was becoming very powerful and gaining advantage. Through these avatars, Vishnu was able to defeat many demons and other evil beings. Other deities have also come as avatars, but are less known in comparison to Vishnu.

Astrology is recognized by a vast majority of Hindus as being very important to everyday life. In Hinduism, the position of the stars or the movement of the planets, for example, are fundamental in deciding who to marry and on what date the marriage should occur. Also, many Hindus will consult experts in astrology when choosing names for their children. Everything from how to build a house, to fasting days, is decided with the help of a pujari who is familiar with the astrological almanacs that are so prevalent in Hinduism. Many Hindus believe that daily events are ordered by astrological rules.

Varna, or as it is commonly translated in English, "caste" is another well-known, but often misunderstood, Hindu concept. The origin of the caste system as seen in India today is ancient. Scholars argue as to its true origin, without consensus to this day. Many Hindus believe that varna, or the division of humanity, was a God-given system, and vestiges of it can be found in the Vedas and many other sacred texts. However, many scholars believe that the caste system was developed to create occupational divisions so that each person becomes responsible for helping to maintain society in a balanced manner by working within their caste. Varna is divided into four castes: Brahmin, Kshatriya, Vaishya and Shudra, with a fifth group being deprived. This fifth group has adopted the term Dalit. Brahmins are traditionally the priestly caste. Historically, they were more schooled, especially in the area of religious studies, and were expected to guide others. Kshatriya is the warrior caste; many of the ancient kings were of this caste. Vaishya is the merchant caste, consisting mainly of business people. The Shudra is the lowest caste. Those in this caste work minor jobs and perform impure tasks along with outcasts, such as touching and burying corpses. The first three castes mentioned above are known as those who were born twice and participate in certain initiation rites that other castes do not. A sacred text says that Brahmin was created from the head of God, Kshatriya from his shoulders, Vaishya from his thighs, and finally Shudra from his feet. There are numerous sub-castes within the comprehensive caste system described above. Although there have been many attempts throughout history to reform the caste system, it remains intact to this day, and is understood to be very important to many Hindus. This is evident when family members seek a spouse for their child's arranged marriage, as it is the common practice to marry within one's own caste. It is also usual to find many people of higher castes refusing to eat with or consume anything cooked by someone from a lower caste. It is believed that doing such can bring impurities to those of the higher caste. The caste system has played an important role in the Indian subcontinent for centuries and is likely to continue - despite changes in urban areas - in the near future.

It is common for non-Hindus to assume, and even spread the false realization, that all Hindus are polytheists. The truth is that there are a number of understandings about god/gods within the Hindu worldview. In fact, most Hindus say that behind all deities and representations of God, there is ultimately only One Force or Ultimate Reality. This Force has been called "Brahma" by many, while others have not given it a name. From this idea of God, many other beliefs and understandings arise. Nonetheless, one cannot deny that there are a multitude of deities found all over South Asia in temples, road sanctuaries, and within Hindu homes in the form of graven images or pictures. Many Hindu families have a particular deity to which they are devoted, which is usually handed down from generation to generation. There are some deities like Ganesa, who transcend sectarian groups and are revered and worshiped by almost all Hindus. Other more philosophical Hindus adhere to what is known as the Vedanta understanding of reality. In this philosophy, the supreme is not a personal god, but is found within the person and is the immortal soul. This can only be understood through strict adherence to meditation and other forms of yoga. The follower of Vedanta is often opposed to the worship of idols and believes that all the paths of faith lead to the same ultimate goal. There is a significant minority that fits into this group of Hindu traditions, often schooled, and therefore influential in government and education. In the thousands of villages, there is much more emphasis on the worship of deities, and in many places the villages still have a goddess that is given its own temple and festival. Many Hindus turn to the deities in times of need, taking offerings temples in order to receive blessings.