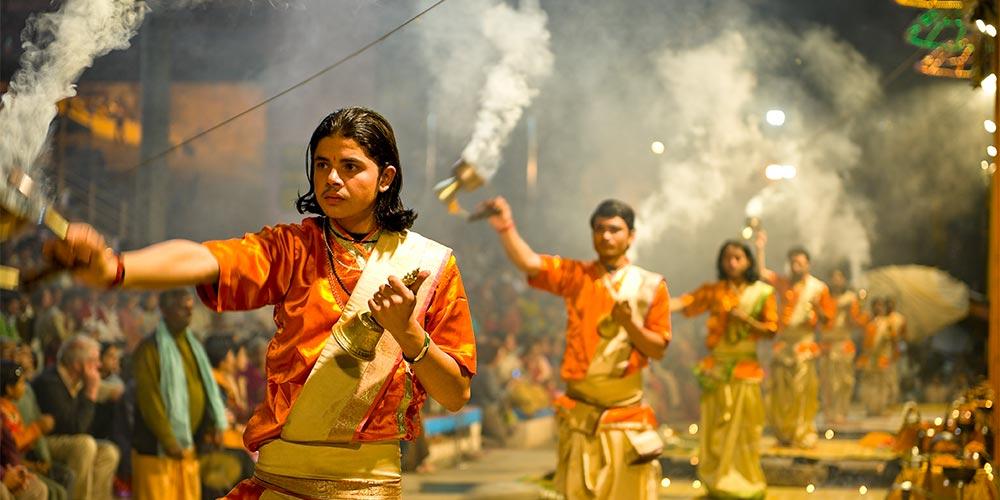 There are three major religions that started on the subcontinent of India and are found throughout the world today.

There are two main categories that most Hindus fall under:

In order to better understand Hinduism, it is important to understand the word "Hinduism" itself. Up until the nineteenth century the term "Hinduism" did not exist. Prior to this time the various beliefs and understandings of god and life on the Indian subcontinent were divided into numerous sects or sampradaya. It was after the arrival of the British to India that the term "Hinduism" developed. When the British arrived they recognized Muslims and Christians, but the many other traditions and practices they came across were foreign and unknown. Much time was spent on reading ancient texts and translating them into English or other European languages. This came to be known as the study of Orientalism. The European Orientalists devised the term “Hinduism” to describe what in reality is many different religions.

The term Hindu is rooted in a non-religious background as well. The term was developed from the name of a river in North India called the Indus. It was a term used to describe all Indians regardless of religious background, and has been used for centuries.

Why is it important to know this? It is important because it can help us better understand that what we know today as “Hinduism” is really many different ways of thinking about god and life, and includes numerous philosophies and methods of practice. In fact, it is better to attempt to understand the various strands, rather than lump them all into one so called "religion.” There is no set of systematic beliefs or overarching creed that all Hindus adhere to. Instead, diversity is part of what makes Hindus who they are.
Hinduism, if the term is used, is probably best understood as a way of life or culture, as opposed to simply a religion. Nonetheless, it is important to remember that religious thinking and practice are a vital part of most Hindus' lives. This must be taken into account in any discussion about Hindus or Hinduism.

We will attempt to provide a sample of the various Hindu ways of thinking and practices in order to help you better understand this complex set of traditions and perceptions of life.

“The Great Banyan is not a bad symbol of Hinduism. Like the tree, Hinduism is an ancient collection of ‘roots’ and ‘branches’ representing varied symbols, beliefs and practices that make up individual sub-traditions, which are all interconnected in various ways…There is no one founder-trunk, from which different branches proliferate. There is, rather, an expanding tracery of trunks and branches. But unlike the botanical model, the Hindu banyan is not uniform to look at. Rather, it is a network of variety, one distinctive sub-tradition shading more or less into another, the whole forming a marvelous unity -in-diversity.” Lipner, Julius; Lipner, Julius (2012-10-02). Hindus: Their Religious Beliefs and Practices (The Library of Religious Beliefs and Practices) (Kindle Locations 271-273). Taylor and Francis. Kindle Edition.