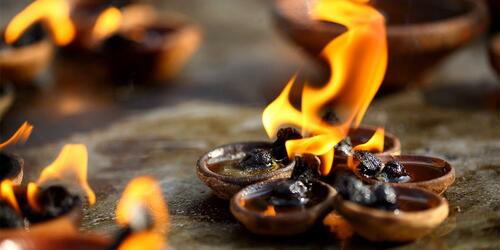 For many Hindus, various rituals and practices form an essential part of their everyday lives. The range of rituals and practices is extensive and cannot all be covered here. Anyone who spends time in South Asia or among South Asians in the diaspora, quickly comes to realize just how important rituals and practices are to the average Hindu. Wherever you go, you will see temples open to the public and people quietly worshipping by roadside shrines. If you enter Hindu homes you will become aware of the puja corner or portion of the house dedicated to the deity of choice and used for household worship. Beyond the daily activities, there are large annual festivals with their own unique rituals and practices. Below you will find a brief description of some of the various Hindu rituals and practices. However, it is important to remember that this is not an exhaustive list, but rather a sample.

Before giving details regarding the household puja, it is essential that we understand what the term puja actually means. Puja is not easy to translate into English, but can roughly be equated with the English word 'worship.’ Puja is the sum of the various rituals and practices that go into worship, whether it be at home or the temple. Often different castes have different methods and types of puja. Most Hindus reserve a small portion or room within their homes dedicated to either the family deity or to a number of deities. In this portion—often found in the kitchen—you will usually find images of the deity/deities, whether that be in picture form or an actual statue. It is not uncommon to also keep the pictures of deceased parents or spouses in this space as well, in order to remember them during the daily worship. Often the daily puja is performed by the matron of the house, although others in the family can and are involved, depending on the family. There is no exact procedure for puja, although you find certain practices that are fairly universal among Hindus. Often flowers, along with possibly fruit, are offered to the deity, and a small camphor flame is waved in front of the images. As well, various other offerings are given, depending on the person doing the puja. Certain mantras are also chanted, along with personal prayers to the deity. After finishing the puja it is common for females to dip their thumb into saffron powder (which is red) and put this between their eyes at the crest of their nose. Before performing these various rituals, the person should take a bath in order to be ritually clean. Traditionally, women who are menstruating should stay away from the portion of the house dedicated to the deity in order to avoid making it impure. Hindu families are usually very protective and particular about who they allow into this space. They are especially careful to not allow lower caste individuals to enter in order to prevent the space from becoming impure. There are many other practices and rituals that vary from home to home. For many Hindus, puja is the most common and most important form of worship and devotion shown to the deity or deities. It is very private and basically involves only the family and deity. Only during special occasions, i.e. a birth or wedding, will a priest be brought into the home to perform the puja. It is necessary to have some knowledge of household puja if one wants to understand the way in which Hindus show devotion and worship to their deity(ies).

Like household puja, temple puja is also imperative for many Hindus. Puja in temples also varies from temple to temple based on the deity that is housed there and various other factors. There is no required or expected time that a person has to visit a temple for puja; that is primarily left up to each individual to decide. Some Hindus rarely visit temples, only visiting in times of special need or occasion. Others attend regularly, and many even daily to show their devotion to the deity and in hopes that they will gain a blessing. Most temples have a resident priest or priests depending on the size and popularity of the temple. These priests are in charge of maintaining the temple premises, as well as attending to the needs of the deity. Along with those responsibilities, they are also more importantly in charge of performing puja on behalf of visitors to the temple. It is common for visitors to take offerings of fruit and flowers to the deity. As well, it is usual for visitors to take a coconut to the priest which is then broken in two, half being retained by the visitor, while the other half is kept by the priest. Some will also take articles of clothing, such as a sari, to be worn by a goddess. This is done in order to gain a blessing from the deity. The priest will present the offerings to the deity then speak certain Sanskrit mantras. During this time, devotees usually look straight into the eyes of the deity, which is called darshana, and is one of the more important moments of temple puja. Hindus believe that this action allows power to be transferred from the diety to worshippers. As the priest says the mantras, he often waves a small camphor flame around the image, then takes the flame out of that space and waves it around the head of the worshippers. Finally, after the puja is completed, the priest will take some of the flowers offered to the deity and distribute them to the visitors, usually certain types of sweets are also distributed after being blessed by the deity. This is known as prasad. By eating the prasad, it is believed that devotees ingest the blessing. Most temples are open all day, while diety rooms will only be open at certain times in the morning and evening for viewing. While there is no set time for temple puja, most temples have an annual festival commemorating deities either on a deity's birthday or during some other significant event that the deity is believed to have performed or been a part of.

There are innumerable sites in South Asia that are considered to be places of sacredness. These sites are often the location of pilgrimage for countless Hindus from around the subcontinent and the world. On the other hand, there are many local sites that are frequently visited by local Hindus and are of great importance to those local people, but may not be of significance to the wider Hindu community. However, there are certain sites that are revered by large numbers of Hindus and are well known as pilgrimage sites. The seven most sacred sites are: Varanasi and Hardwar, located on the river Ganges, receive thousands of pilgrims every year; Ayodhya, believed to be the birth place of Lord Rama; Mathura, believed to be the birthplace of Lord Krishna; Dwarka, a city where Krishna ruled as king; Kanchipuram, the Shaivite temple city in South India; and Ujjan, the site of the Kumbh Mela every twelve years. By no means are these the only pilgrimage sites considered important, however, almost all Hindus recognize the above sites as especially auspicious if visited. There are various reasons why a person or family would go on pilgrimage. It is believed by many that simply the act of going is a sign of devotion towards the specified deity, which can result in special blessings. Others also believe that by performing pilgrimages one can remove their sins, which is especially true of the pilgrimages to the sites along the Ganges River. Taking a bath in the Ganges is considered extremely sacred and removes the sins of the bather. Often water is taken from these rivers in containers to be placed in the household puja site to bring continued blessing to the family. Certain pilgrimage sites are scenes of the world’s largest religious gatherings, with millions of devotees attending to take part in particular acts during auspicious times. Every twelve years the Kumbh Mela attracts devotees from all over the world and is considered the single largest religious gathering found anywhere on earth. Many Hindus make sure that at least once in their life they go on a pilgrimage to visit some of the more holy sites in India. By doing so, it is believed much merit can be gained and the karma of the pilgrim is greatly improved.